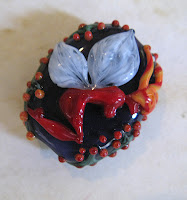 Well, it's the official start of summer and man, is it hot here in AZ! Take it from someone who lost their central air! It was 96 degrees upstairs today, so no torching for me, thank you.
I am anxious for it to cool down, possibly if we receive any cooling monsoon rains in the near future, but it doesn't look likely for the next week or so.
In the meantime, I will be posting items for sale on my Etsy site and trying my best to keep cool. But in keeping with the heat, here is a Fire Faerie to fuel the flames.
Posted by Jeannie Cox at 6:59 PM 1 comment: 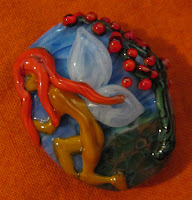 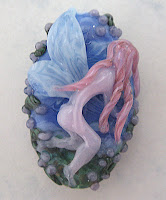 I am hoping to improve more on the design, but here is where I am at the moment. I am calling these "Faeries and Berries" since they either have vines with berries on the sides or a tree with fruit/berries.

I am very excited that the nicer one (the pink faerie bead) will be making a trip to her new home in Finland with Janette.

Tough Times, but Working it Through

Okay, it's been a while since I posted, but much has happened in the short time I've been absent. It seems like everything has been going wrong that could go wrong lately - - major Murphy's Law in our household.

The latest in a slew of mishaps and breakdowns has been our central air conditioner. It tries to kick on, but keeps humming and then stops. I believe it's the compressor, but the part alone costs a minimum of 280.00, and that doesn't include anyone climbing up to our high peak on the roof to fix it, so it doesn't look like we'll be fixing it anytime soon.

Still trying to look on the upside, tho. We have my parent's little AC unit, which keeps the living room somewhat cooler (even tho it still has gotten up to 86-88 degrees) than the outside temps of 100+. And, hey, our electric bill should be a lot cheaper in the coming months, so maybe our bill will drop low enough to actually save to fix the dang unit.

My schedule is all flip-flopped now since I can only torch between 1am-7am since that's the only time it's cool enough in the studio. So, I am trying to get in sessions when I can, and it's still cool enough at night. Hopefully I will be able to sell a few pieces, at least enough to keep us going for a while longer and hopefully fix the air. Here's to hope!!

My latest adventure is listing some items on Ebay - - link attached. You can also search Ebay by entering my name and all my items should come up.
I also have more items on Etsy if anyone is interested. Believe me, the money will go to a great cause - - keeping us cool!!!
Posted by Jeannie Cox at 1:46 AM 2 comments: