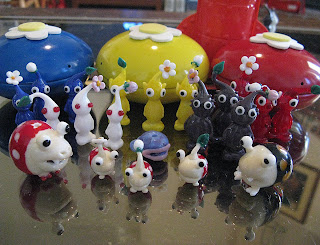 I hope everyone had a nice holiday season and a fun New Year celebration. I spent a lot of pre-Christmas time creating gift items for my family members, so now I feel a little behind the gun with creating items for sale in my on-line shops and upcoming shows. Since the holidays are over now, I am hoping to get back in the studio and start creating, creating, creating!
The biggest, most time-consuming project I did as a Xmas gift this year was creating a whole set of little Pikmin characters for my son. We both love the Nintendo Pikmin game and he's been wanting some of those little plastic guys which are sold overseas. I searched the net, but they are dang expensive so I decided to make him his own little glass set. He now has all the Pikmin, some bulborbs, some bulbmin and a water dumple. There were also some extra Pikmin which are not in the picture here since I didn't like the way they came out and re-did them. I also tried to make Olimar (the space man), but he cracked. Maybe I will try him one day again, but for now at least, my son has a set he's really enjoying.
So now that it's 2011, it's time to get back to work. I hope everyone has a wonderful 2011!
Jeannie
Posted by Jeannie Cox at 1:00 PM 2 comments: